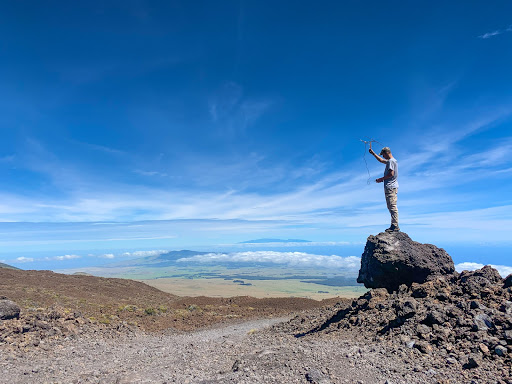 Alex (Fall 2018 cohort) is originally from Pennsylvania and is doing his internship with the Natural Area Reserve System (NARS). He assisted with the 2019 Palila release at Puʻu Mali trying to restore a population of endangered honeycreepers. He has also been able to participate with the Alala Project, native bird banding, and invasive predator control. His favorite part of the internship has been the satisfaction of knowing that he is helping to restore an endangered bird population that has fewer than 1,000 individuals remaining in the wild. The most challenging part about the internship was the constant hiking up the slopes of Maunakea as they track the released birds with radio telemetry. 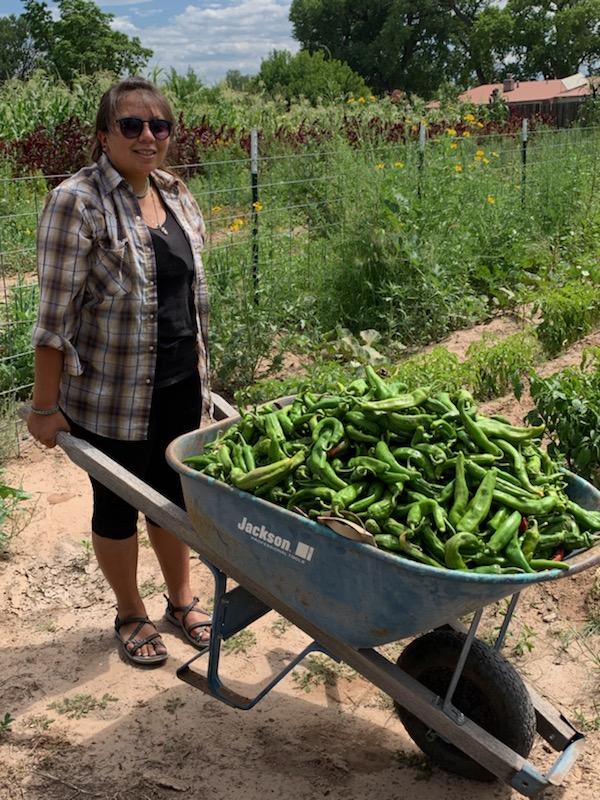 Talavi (Fall 2018 cohort) is originally from Ohkay Owingeh, New Mexico and is doing her internship with Flowering Tree Permaculture Institute. The agency is a non-profit organization ran by Indigenous people of the Southwest desert that primarily focuses on permaculture, traditional ecological knowledge (TEK), and cultural preservation through Indigenous ways of knowing. Talavai's position includes a wide array of responsibilites including learning how to build a chicken coop, taking care of turkeys, chickens, ducks, pigs, sheep, fish, and even bees, establishing herb gardens, a compost toilet, seed bank, green house, irrigation fields, and creating healthy ponds with various fish and plant species. Her favorite part of the internship is knowing that she is able to help the environment, conserve the land, and reset her well-being by practicing traditional pueblo methods and techniques that Indigenous people have been doing since time immemorial. One of the challenges she faced was participating in a one-month Pueblo Food Experience which consisted of changing her diet by only eating and drinking traditional native foods and liquids, i.e., traditional foods being anything pre-contact to European colonialism. Fortunately, her health vastly improved after this experience and she plans to sustain this diet for the rest of her life. 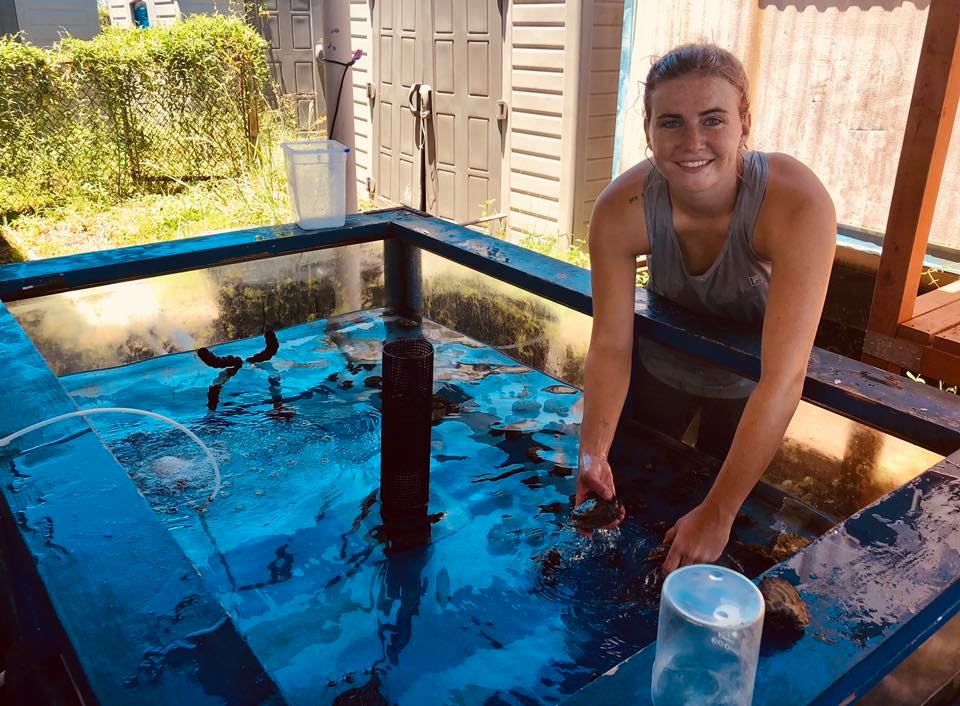 Samantha (Fall 2018 cohort) is originally from Stroudsburg, Pennsylvania and is doing her internship with Pacific Aquaculture and Coastal Resources Center (PACRC). Once an old wastewater treatment plant, PACRC now serves as the University of Hawai‘i at Hilo’s aquaculture facility. PACRC supports commercial aquaculture and fisheries while promoting conservation in East Hawai‘i and worldwide. She serves as a intern/volunteer at PACRC in the bivalve hatchery and as an intern with the children’s learning center project. In the bivalve hatchery, she assists with the day-to-day functions needed for successful production while gaining valued hands-on aquaculture experience. As an intern working on the children’s learning center project, she helps in the renovation and transition of PACRC’s pavilion space into the new children’s learning center facility that will host local schools and community functions with a focus on children kindergarten through middle school. Samantha's favorite part of the internship: having the chance to be involved in community outreach; and the most challenging part of the internship: "FIRE ANTS EVERYWHERE" 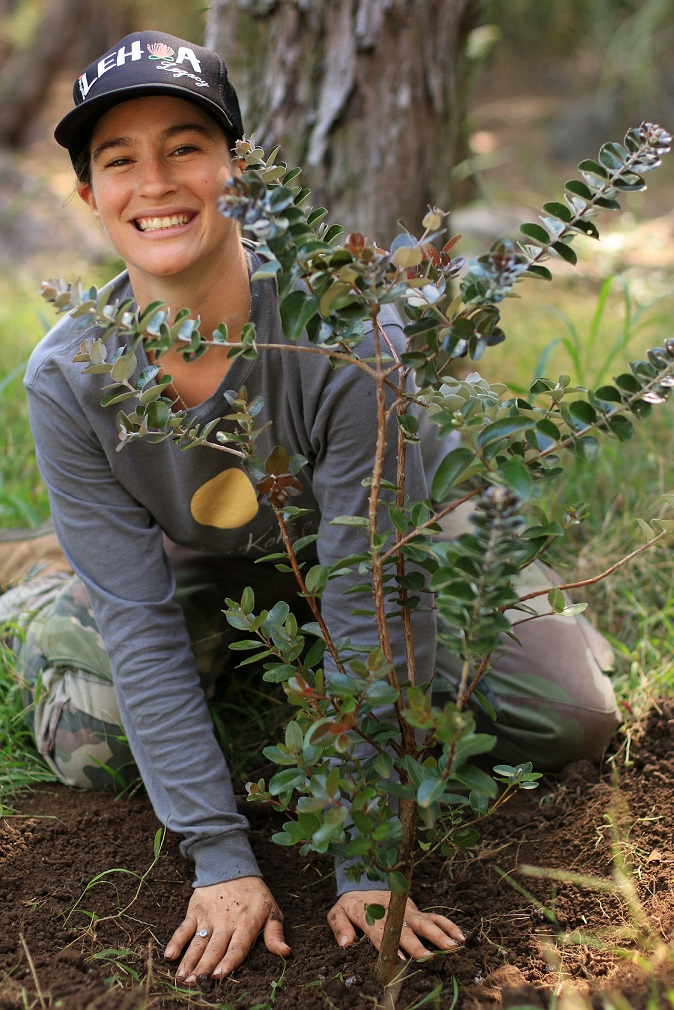 Leilā (2018 cohort) is originally from Pāpaʻikou, Hilo Palikū and is interning with Hui Mālama i ke Ala ʻŪlili (huiMAU). She is helping restore and mālama the ʻāina of Koholālele, lead ʻāina education groups that huiMAU hosts, and collect and help process water samples for their microbes in order to assess the health of our ahupuaʻa. In addition, she is creating a curriculum to increase huiMAUʻs capacity to train future ʻāina educators at Koholālele and enhance huiMAUʻs education offerings. This guide includes a compilation of moʻolelo shared during visits, lessons that could be covered, as well as the ins and outs of running a typical mālama ʻāina group day. Leilā's favorite part of the internship is working with an organization that has a truly Hawaiʻi piko: "I love being able to work in ʻāina and so closely with the ʻohana and community members of Paʻauilo. I also love being able to feed our community physically, spiritually and emotionally, but also helping teach them how to feed themselves and create more pilina with ʻāina and one another." The most challenging part of the internship included weed whacking guinea grass without proper clothing! She now knows to cover up so she is not covered in fiber glass-like hairs after a rewarding day of work! When not at Koholālele, she connects with the kai through surfing. 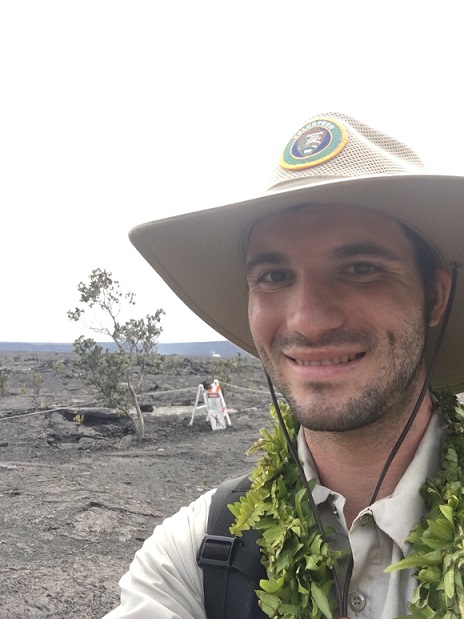 John (Fall 2018 cohort) is originally from Jacksonville, Arkansas and is doing his internship with the National Park Service in Hawai'i Volcanoes National Park. John works within the Interpretation Department at Hawai'i Volcanoes National Park, where he engages with visitors from all over the world about wildlife, natural areas, and cultural sites. For the internship, John's main duties are to answer park guest questions and provide suggestions about where they should go based on the what they want to experience. In addition, John started developing a new ranger talk for Hawai'i Volcanoes National Park and updating the volunteer handbook. John's favorite part of the internship occurred when he performed test versions of his ranger talk. He mentions how rewarding it was to see park guests engage in critical thinking about conservation related issues while simultaneously enjoying their experience. The largest challenge for John was developing the conservation talk in a way that carefully balanced the messages about threats to the environment and the ability for guests to have fun while feeling empowered. 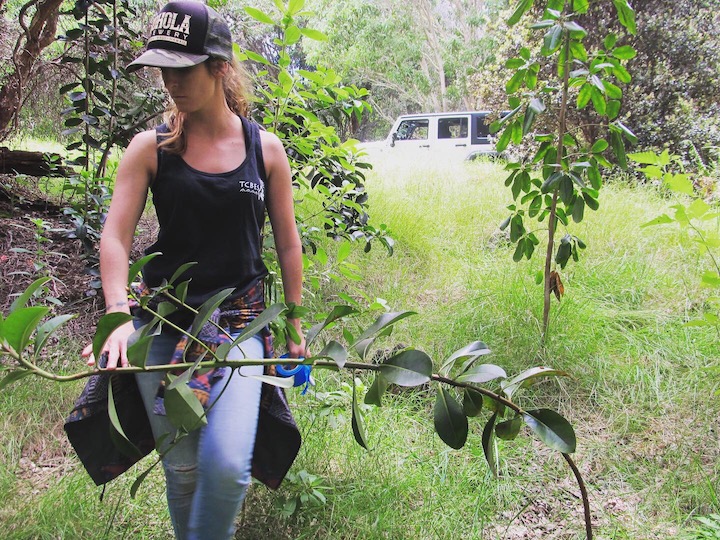 Maya (Fall 2018 cohort) is originally from North Kohala, Hawaiʻi and is doing her internship with Three Mountain Alliance. Three Mountain Alliance is a watershed partnership that conducts native restoration, and ungulate and bird monitoring. She is an assistant to the data manager and is involved with inputing and synthesizing the data that the field crew collects, helping in writing reports, and participating in collecting restoration monitoring data and out-plantings of native trees. Her favorite part of the internship is going out in the field to collect data and writing the reports because those are skills that she will use for the rest of her career. The most challenging part of the internship was creating a digital report of the restoration data using ArcMap and Google Earth. 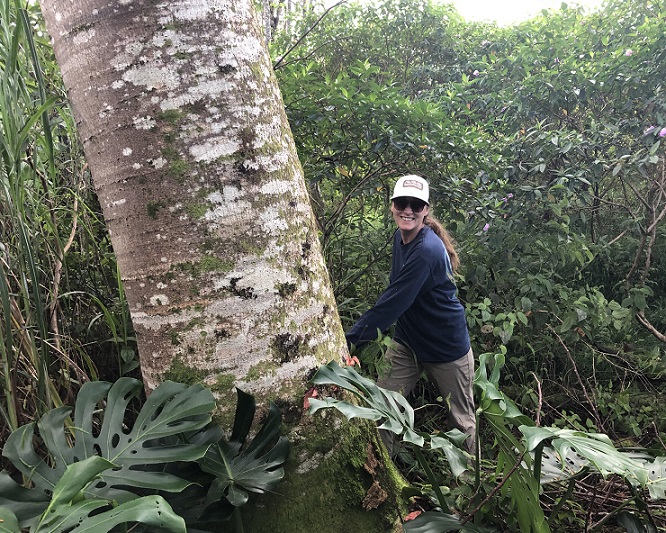 Amanda (Fall 2018 cohort) is originally from Alaska and is doing her internship with Big Island Invasive Species Committee (BIISC). Amanda has thoroughly enjoyed her time with BIISC and mentions how great it has been working with colleagues that all share a real passion for conservation. She has been involved with analyzing invasive plant data and trying to figure out if their efforts have been successful. An aspect of her internship she has enjoyed the most were the conversations with different people at BIISC about invasive plant species in Hawaiʻi. One challenge she faced was trying to figure out how to answer BIISC's question about their efforts being successful or not. 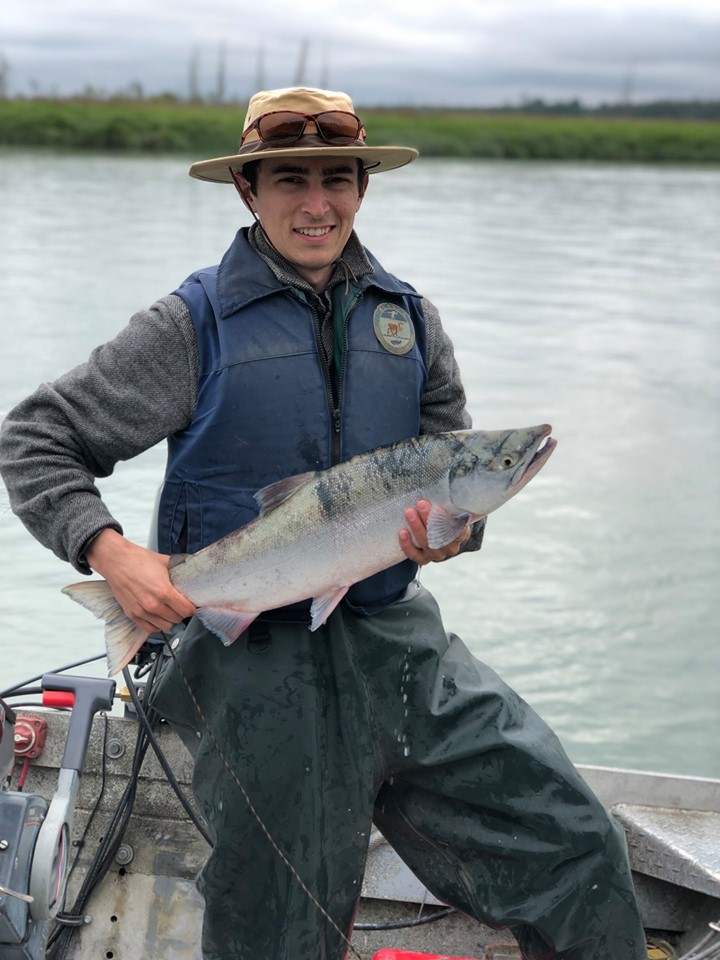 Wilson (Fall 2018 cohort) is originally from Soldotna, Alaska and is doing his internship with Alaska Department of Fish and Game (ADF&G). ADF&G is tasked with the sustainable management of Alaska's fish, wildlife, and aquatic resources. Its aim is to enable human use of the state's natural resources for the benefit of people and the economy. Wilson's position as a technician with ADF&G involves collecting genetic and catch-per-unit-effort data on chinook and sockeye salmon (Oncorhynchus tshawytscha and Oncorhynchus nerka) for the purpose of managing the fisheries of the Kenai river. Genetic data are used by managers for the identification and temporal tracking of sub-populations within each species so that season openings can be timed correctly and catch limits can be established. Catch per unit effort data are obtained by deploying gill nets from the research boat, timing the length of each set, and counting the number and type of salmon. He is also tasked with statistically analyzing trends in population structure over time to determine the distribution of fish by sex, length, age, and growth rate, as well as the in-season trends in length that may indicate temporal sub-population differences during the run. His favorite part of the internship is working outside every day where he gets to experience a diverse range of wildlife. A challenging aspect of the internship was conducting creel surveys, which involves driving a boat up and down the river to count boats and the number of anglers. The position also required him to interview anglers, and record the amount of time they spent fishing and the number of fish they caught. Talking to strangers can be intimidating, not to mention asking them about taking scale samples from their fish catch. 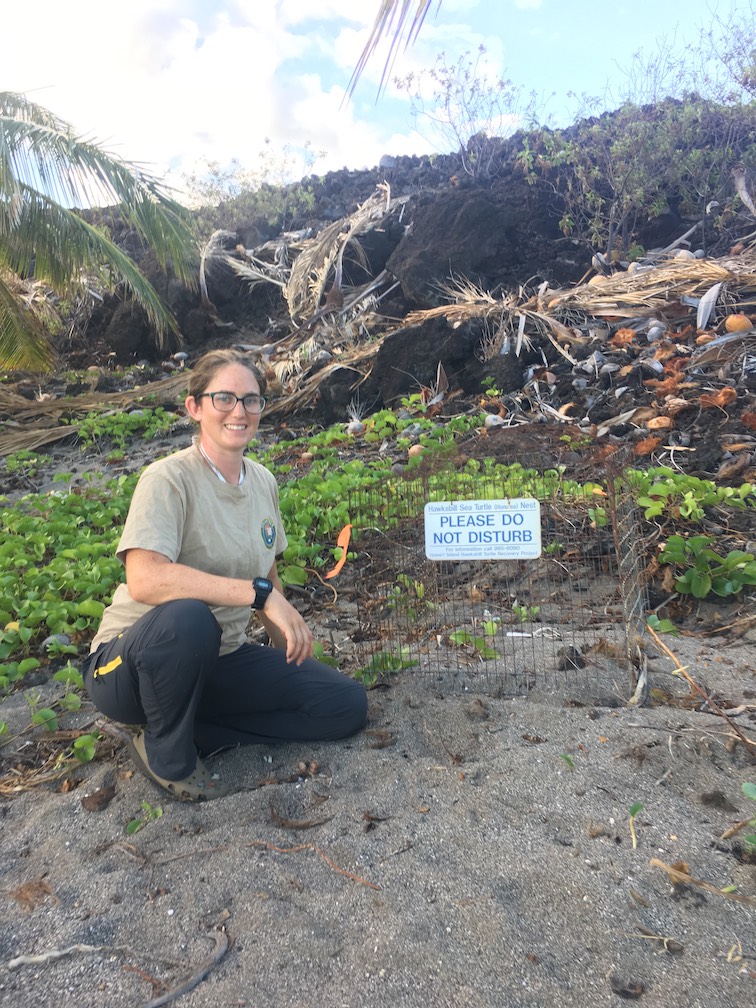 Kelsey (Fall 2018 cohort) is originally from Napa Valley, California and is doing her internship with Hawaiʻi Island Hawksbill Sea Turtle Recovery Project. The Hawaiʻi Island Hawksbill Sea Turtle Recovery Project began monitoring for Hawksbill nesting activity in 1989, tagging of nesting females began in 1991, and intensive monitoring efforts that included nesting beaches both inside and outside of Hawaiʻi Volcanoes National Park were initiated in 1993. The new untagged nesting females coming up this year could be from the project’s first documented clutch of hatchlings. Kelsey was part of monitoring two turtles returning for their biennial appearance and also experienced a nest excavation. As a volunteer the work is immersive: working at secluded beaches on the Big Island of Hawaiʻi, helping protect a critically endangered species, releasing hatchlings, and tagging new turtles. 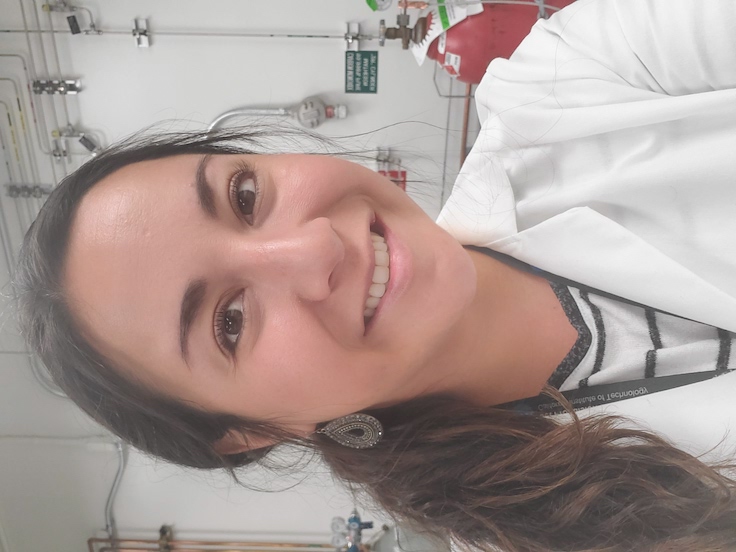 Vanessa (2018 Cohort) is originally from the grand state of Arizona and is an intern for NASA's Jet Propulsion Laboratory (JPL). The Astrobiogeochemistry lab (ABC lab) at JPL focuses on the optimization of biomarker and biosignature research and methodology with the overall goal of preparing for Mars Sample Return from the Mars 2020 mission. The field of Astrobiology utilizes interdisciplinary studies to understand the origin and evolution of life on Earth, and then uses these analogs to plan missions for the search of life in the cosmos. At JPL she works with maleimides, which are degradation products of chlorophyl. The unique structure of these biomarkers can be isotopically dated, giving insight on ancient primary production and ecology of ancient seas. Using GC-QqQ-MS, Vanessa, along with her colleagues, have been able to infer not only the ecological interactions taking place in the water column 400 million years ago, but they are able to make inferences on the biogeochemical cycling during this timeframe utilizing the Compound Specific Isotope Analyses (CSIA) of C, N, and H found within the maleimide structure. Working at JPL has been the experience of a lifetime for Vanessa. The amount of scientific collaboration taking place at JPL is absolutely moving. She has made countless connections through networking that are proving to be truly life changing. Her favorite part of interning with JPL was being able to go and see the Mars rover every day during the process of it's assembly. She emphasizes how surreal of an experience it was to see the Mars rover with her own eyes and think about the fact that this technological creation would make its way to Mars one day. The most challenging aspect of her internship was living away from home for 15 weeks. Vanessa says, "Coming to a new place without knowing anyone can be a challenging thing, but it also opens doors for growth, both personally and professionally. Now that I have been here, I think the hardest thing I will have to do is leave JPL. It's just that great of a place!".